The Secrets to Choosing the Best Rifle Scope

The Secrets to Choosing the Best Rifle Scope 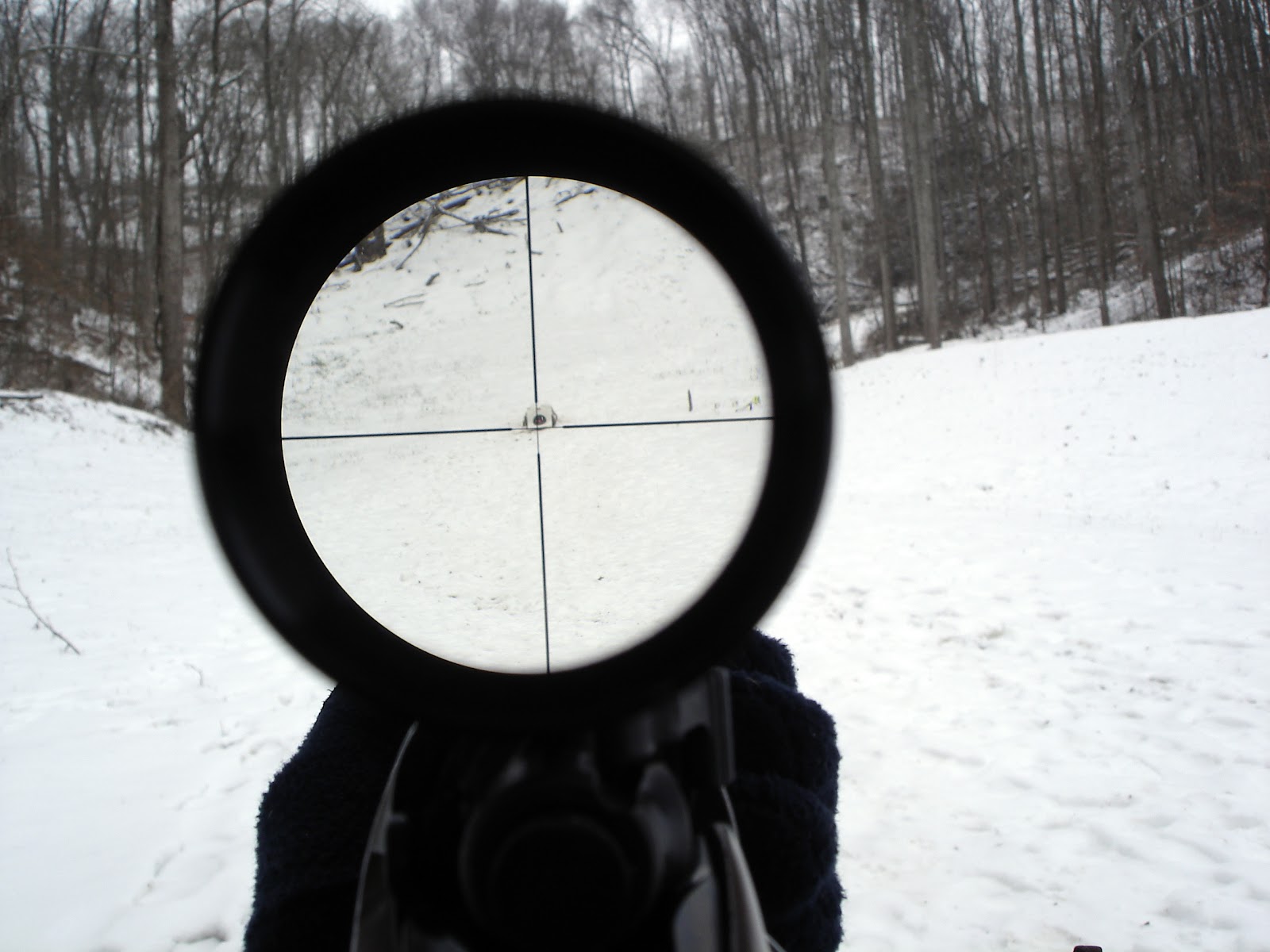 Choosing a scope depends greatly on what type of shooting you intend doing. Target shooters will require scopes in the higher power range, anything from 16 power to 80 power depending on the discipline they are in.

Hunters who shoot at close range and for rapid acquisition of the target may be better off with a “Red Dot” or a 1-4 power scope. This low power scope is ideal on a lever action or pump action when you are hunting pigs.

The majority of scopes we fit to hunting rifles are a 3-9 power scopes as they cover most situations. If you do long range varmint hunting on small game a 6.5-20 power would be a good choice.

Nighttime and low light situations brings its own problems. This is where a scope with a large front lens to gather more light is desirable. It is often very confusing looking at the relationship between the power of the scope and the front lense. Most scopes use a common designation such as 3-9x40, 4-12x50, 8x56 etc.

Now to the relationship between the two figures. The pupil of the eye at night has been determined to open up or dilate to approximately 7mm so this is how much light needs to reach the eye for maximum night time vision through a scope. The way to work that out is to divide the size of the front lense by the power of the scope so for example a 56mm front lense divided by the 8 power works out at 7mm of light at the rear lense.

So as can be seen a 20 power scope with a 40mm front lense will only let through 2mm of light and will look dark to see through at night.

The other factor that must be taken into consideration is the quality of the glass used for the lenses. A cheap 8x56mm scope with poor lense quality will still not transmit sufficient light to be really satisfactory. At first glance during the day a lot of cheaper scopes look great because your eyes don’t need as much light through the day but they appear dull when light levels drop.

The best lenses are made in Europe and Japan. The other trend that is happening with top name European scopes is they now sell a cheaper line. Some of these scopes do not perform as well as their higher priced cousins and there can be as much as $1000.00 difference in price. The old saying you only get what you pay for, is very true when buying scopes. It is not what you see on the outside, it is the way every process of the scope has been designed. Some of the more reputable companies do a drop test to see how well their scopes will handle the equivalent recoil of a .375 H&H Magnum, most of the cheap scopes will literally fall apart under this test.

Now comes the question how much should I spend on a scope?

The price will depend largely on how much you can afford but also the hunting situation you are in. If you are just hunting rabbits with a .22 Rimfire then it is not so critical. If you are on the land and losing stock to predators and incurring huge financial losses, buying a cheap scope is false economy.

The other critical area is in hunting dangerous game you definitely do not want a problem with a scope under these situations. Most big game guns still use open sights for this reason as well as quick acquisition of the target.

A common mistake that is often made is putting too large a scope on a rifle particularly .22 Rimfires. Most shots with a .22LR are made under 75 metres and generally a 2-7 power scope which is physically not too large is a good choice. It is also desirable to have a dedicated rimfire scope that has been parallax adjusted to 50 metres.

As an explanation parallax in a scope can be seen by having your rifle in a secure rest and moving your eye across the rear lense either side to side or up and down.

If the parallax is not correct you will see the crosshair moving across the target as your eye moves.This means that you will have a different impact point on the target whenever your eye is in a different position on the scope. Most of the higher power scopes have a parallax adjustment either on the front of the scope or on the side of the scope to eliminate this problem.So when you are on target and move your eye, the crosshair should be rock steady on the target.

Most centerfire scopes without parallax adjustment are set to 150 metres so that when you are on the highest power and closer than what the scope has been setup for your target will look out of focus and parallax will be present.

The other consideration is reticle or crosshair type some of which are available below. The duplex reticle has proved the most popular for hunting.The mil dot and rangefinding reticles are used mainly for long range varminting or target use and are available in different thickness reticles. If the reticle is too fine it is hard to see the target particularly in low light. This can be overcome by having an illuminated reticle which can be seen under low light conditions and they usually have several levels of brightness. 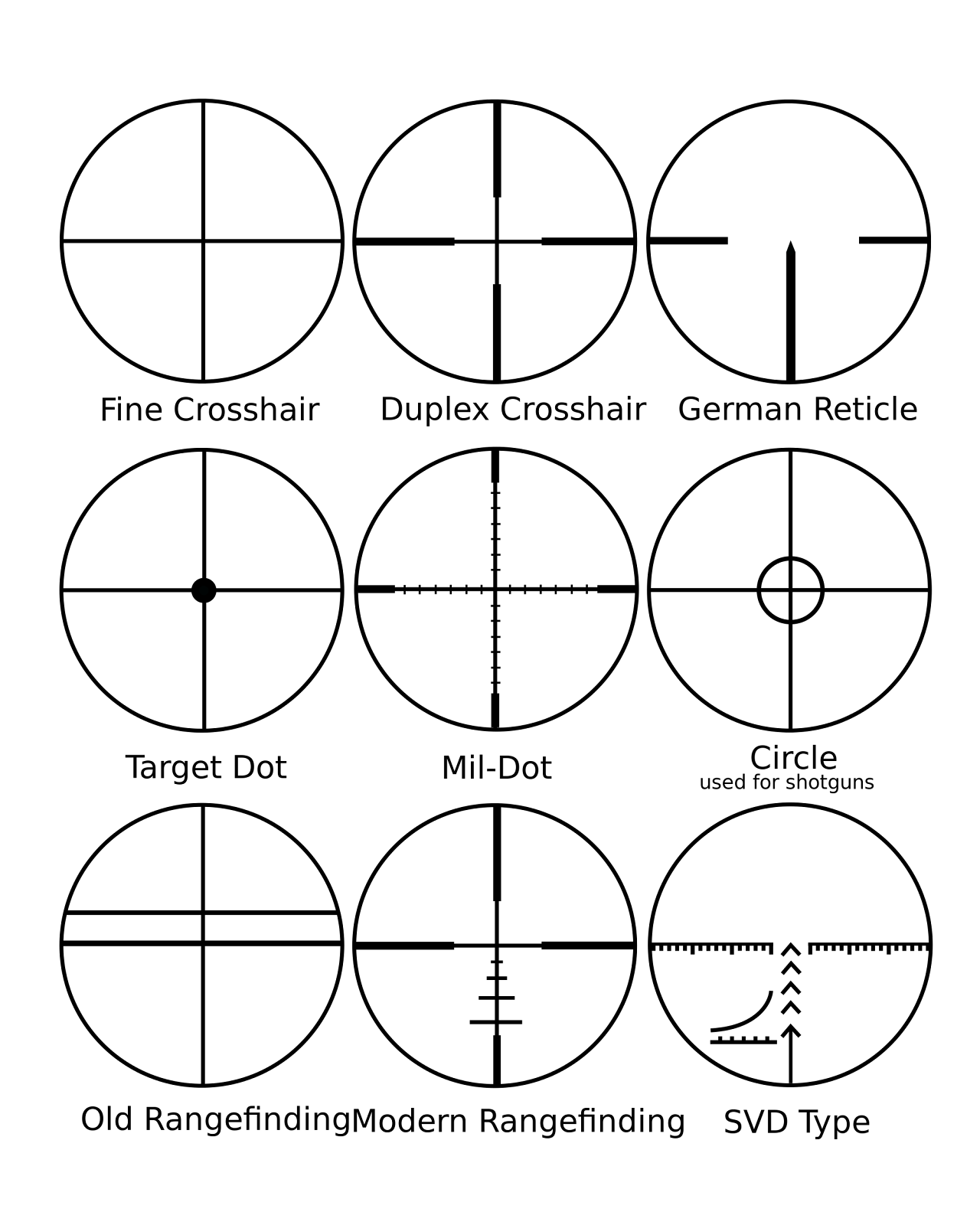 Another innovation in scope technology is the Burris eliminator scope which has a built in rangefinder out to 1200yds and also lights up a dot on the reticle to give you holdover for the particular calibre you have programmed it for.

Air rifle scopes are another area that require a good quality scope. Due to the harsh recoil and vibration of the larger spring type airgun an ordinary scope that is suitable for a centrefire will probably fall apart on a large air rifle.

If a good quality scope is unaffordable it is probably better to use the open sights for a while. The exception to this is the precharged pneumatic air rifles that have virtually no recoil and therefore can take some of the cheaper scopes.

There are a lot of considerations to be taken into account when choosing a scope for your rifle, but as a general rule make sure you are purchasing a scope that is suitable for your purpose, and keep in mind that you do get what you pay for.

If you would like some assistance with choosing a scope feel free to give John at Hunting Haven a call on 02 67784144 and he would be happy to help you out.